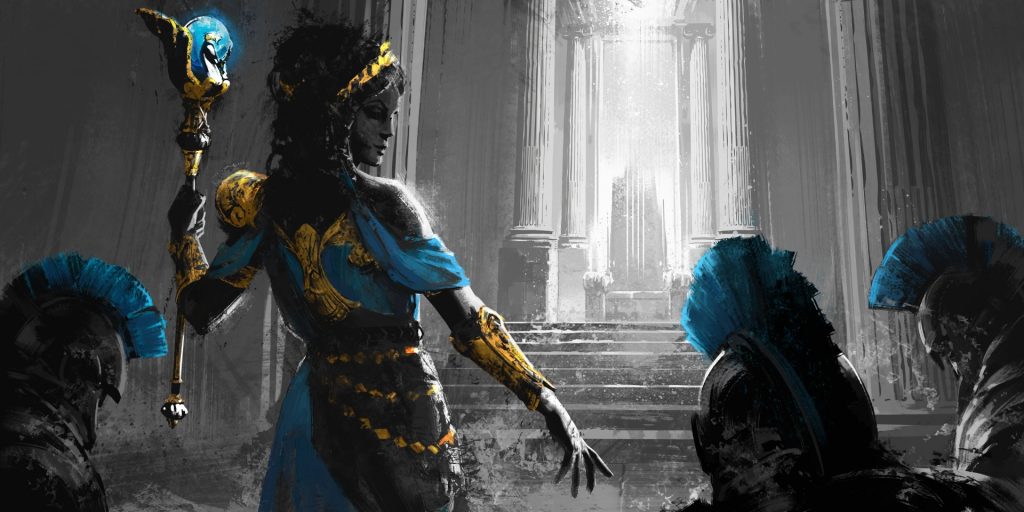 Mount Olympus was quiet, while all the world around it burned.

Darkness reigned within the grand palace that stood at the mountain’s peak. No lamps were lit to offer their flickering light to halls of breathtaking frescos, intricate mosaics and the countless priceless treasures that rested upon gilded plinths, collected from eons of divine conquest.

To any other who walked these halls, such sights would have been beyond comprehension, any single one of them so magnificent that it could change the course of an entire life in a moment. Yet she walked past them without a glance, the only sound the soft rustling of her robes and the clanking footfalls of her guardians ringing from the walls.

She walked into the throneroom, once a vibrant place thronging with the gods of the pantheon, their champions and their attendants. Music had filled the air, weaving between the impassioned debate of philosophers and the earnest laughter of friends. Raw power rippled within these walls, a place where destiny was written and the crux of the world turned.

But there was none of that here now, replaced by the silence and shadow of a tomb. As empty as the throne of exquisite marble she stopped beside, dominating the chamber from its place on the central dais.

“You old fool,” she whispered, running a hand down the side of the empty throne. Her smile was soft, one that remembered moments of love and glory. Moments that felt so distant, in the current darkness.

Her protectors shifted behind her in their bronze armor, the visors of their helms lowered away from the throne. Unable to look upon the result of their failure.

“My goddess,” the first of her bodyguard finally broke the silence. “I beg of you, do not do this.”

She did not look back at him, her eyes still tracing the intricate traceries of lightning adorning the throne. “Do you truly believe you will change my mind on this, Helican?”

“It is our duty to do so,” answered Helican, the haft of his great war spear creaking in his grasp. “What you seek to undertake, the risk to you, it is too great.”

“At the very least we must accompany you,” said the second warrior, “to watch over you and ensure no danger befalls you upon your journey.”

“My lady,” Helican pressed, taking a step forward and lowering his voice, “please. It is our oath to protect you.”

At those words, the goddess turned away from the throne.

As you protected him?

She closed her eyes for a moment, drawing in a slow breath and forcing those words to remain behind her lips. They knew well enough what their failure had cost. All of creation knew. She could not fault their feelings now, desperate to preserve whatever they can, with the blood of Zeus upon their hands.

She stared up into the gilded visors of her praetorians, looking to each of them in turn. “Helican, Pryzarias, you have served us with all your strength, and with all your hearts. But the road that lies before me is one I must walk myself. It is my will that I release you from your oaths, and will bind you to a new one.”

Without hesitation, Pryzarias sank to one knee. Helican hesitated for a heartbeat, looking down into her eyes, before he too knelt in a soft clatter of armour plate.

“You shall remain here,” she said, her voice taking a harder, formal edge as she proclaimed her will. “It is your duty to preserve this place,” she spread her arms to the palace around them, “and all the glories it holds. You will keep it as it is now, and make it ready. By this do you swear?”

The short blades at each of the kneeling warriors’ belts sang from their sheaths, spinning in the air before being raised before her with their points aimed at their throats. Her guardians offered their submission, until death, and granted her the choice to kill them now should they not be worthy of her oath. She waited for the span of three heartbeats, before gesturing for them to lower their weapons.

“We swear,” answered Helican and Pryzarius in unison.

“Good,” she favoured them with a thin but honest smile and lifted a hand, prompting her guardians to rise.

She crossed the length of the throneroom, her sandaled feet slapping softly against the marble floor. Finally she came to a halt, standing before the great doors leading out to the peak of Olympus and the world beyond. Her eyes fell over the vast portal, sculpted to depict Zeus cutting open the belly of the Titan Cronus, with the idealized likenesses of their pantheon streaming forth to join him in their rule over all creation.

Her gaze held over one of the likenesses. Her attendants had come to her, in the wake of the tragedy, pleading to deface his image and purge it from wherever it might be found within the palace, but she had denied them. The god they hated, who had taken everything from them, would keep his prominence here, so long as she drew breath. There are crimes that must never be forgotten, and some wounds should never be allowed to heal.

Stepping forward, she pressed her hands against the doorway, the stone feeling cool to her touch. She could feel the world on the other side, burning and screaming in its upheaval. The richness of gods’ blood in the air, and the lamentations of mortals, crying out for deliverance.

A deliverance she would provide.

“My lady,” Helican called out to her, taking a step down from the dais. “My Goddess, what are we to make the palace ready for?”

Hera, Mother of the Gods, threw the doors open, and light cascaded into the throne room to banish all shadow.

“For my return,” she said simply, her eyes locked onto the future unfolding out ahead of her. “To rule.”