Smite Tactics Datamining – General Info, How it works and Review

A new datamining series about newest Hi-Rez Studios videogame, Smite Tactic. The game is yet not released for public and we’re awaiting for closed beta release.

We were able to play and look through the files of Smite Tactics. This is not only datamining but a How it works / review article. Datamining will come in the next days with exact info from the game.

Please remember all the info below is based on the latest build we got access to, at this point a lot of info is probably changed as the game is not even in alpha stage.

This is the first Smite Tactis article in smitedatamining. Yes, the game hasn’t been released yet but we were able to have access to the game and datamine its files.

How it works / Review

According to what we’ve seen Smite Tactics is a board card game where you spawn creatures (Gods) and interact with them. I’ve been understanding it easily if you think as a kind of Yu Gi Oh where you spawn a creature and they appear in the field.

Main difference with other games (And which I like it a lot) is about skills. The gods apparently can have and use different skills with many endings (Heals, Protections, Damage, Buffs, Debuffs, Teleports…)

The Decks are pantheon based, with another one called Neutral which can be used in anyone.

The cards are featured in: Titan (Leader), Gods, Minions and Items.

As you can see in the above image, cards are built from different stats:

Cards are also separated into different tiers, as they are dropped in packs:

For the moment there’s only 4 Main pantheons added (Norse, Greek, Chinese and Egyptian). There is already a few things from Roman but almost nothing.

Ingame files have the 7 pantheons tho, so we can anticipate they will be updating the game slowly in the near future as Hi-Rez usually does.

The game is a card board game, so this is one of the most important features as it’s the field where you will fight. It will feel very important to know your situation, keep a good situation and know how to move through the battle field as it will give you an incredible advantage.

Smite Tactics will feature different scenarios through Smite Maps (Maybe we will end watching some different maps other than smite). Currently Smite Tac

One of the tricks we’ve found is you can unlock the camera, allowing you to view whole scenario. We discovered the Conquest board map is Smite’s Conquest map with a field and a locked camera. It’s actually fun to see Smite’s map being able to be played in Unreal Engine 4.

We’ve taken a few shots from the different images, you can view them all in the below gallery.


According to game files, game modes are Standard Versus, Arena and Ranked. We have no word on Arena yet but we know there’s a PVE gamemode, probably featuring this one. There’s also a tutorial and practice mode.

The game looks very fun, even at this early stage it feels enough content to be happy and have fun for a while until we get rest of content. Hi-Rez has overpassed himself again with this game and will probably keep doing it as they’re a master piece in developing games. Hopefully they will give same or even more promotion to this game as they did with paladins. It could benefit both games Smite and Smite Tactics as people will get interested in playing the gods from 3rd person. 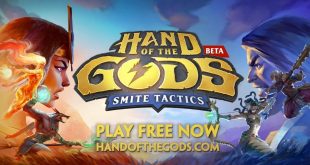